Confessions of an ADD scientist

Posted on August 14, 2018 by cinnabarreflections 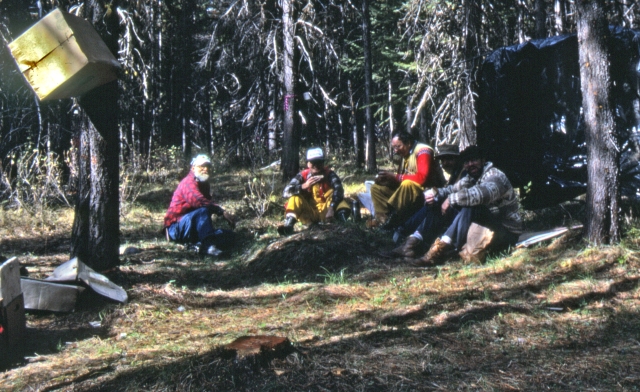 A poor quality scan from a slide, showing me (2nd from left) with scientists from the Pacific Forestry Centre. Immediately to my right is one of my important mentors, Dr. Les Safranyik, who worked diligently on bark beetles throughout his career. I always wanted to check with Les before starting an experiment, because in all likelihood he had tried it at some point! Photo: Terry Shore.

I have very deep admiration for scientists who attack a subject from numerous angles, and persist for years or decades, perhaps even a full career unravelling the mysteries of a particular system. Charles Darwin comes to mind, of course, although he dabbled in numerous systems with the intent of achieving his one big end. He spent 8 years examining and revising the systematics of barnacles, all ultimately in support of his Origin of Species theory (http://darwin-online.org.uk/EditorialIntroductions/Richmond_cirripedia.html).  A more focussed example is Stanford University’s Deborah Gordon, whose long time study of the harvester ant colonies in one specific, fairly small area shows a remarkable level of commitment to a specific system.

Personally I unfortunately lack the gene that allows such focus. I tend to get bored after a while, and switch to whatever system catches my imagination. I used to call myself a “restless scientist”, an epithet former UNBC President Charles Jago once used. Dr. Janice Cook, University of Alberta, used the term “Attention Deficit Disorder scientist”, and I have since adopted that terminology as it seems to describe my approach rather well.

My first attempts at research (if you can call it that) happened while I was a biology undergraduate student, both with or encouraged by Christer Nilsson, who is now a very successful professor of landscape ecology with a focus on stream impacts of human activities. One was an attempt at using hormones to influence coloration in cichlid fish, and the second was a survey of flat bark bugs (Aradus spp., Heteroptera: Aradidae) on lodgepole pine.  Needless to say, I had no idea what I was doing, so the former yielded somewhat uninterpretable results, while the latter never really got off the ground!

I started my real research career, not in entomology, but in endocrinology.  A very good instructor in zoophysiology had made me think that I would like endocrinology (showing the importance of inspiring instructors!), and an additional incentive was that I would actually have funding. At the time, I had two other options, but both came with uncertainty of funding. One was with Jan Pettersson at SLU in Uppsala working on aphids, and the other with Hans G. Boman at Umeå University working on insect immunology with Hylobius abietis as a study organism. I followed the money, but my time in endocrinology turned out to be nothing but a dead end detour from my passion for insects. I managed to squeeze out five publications on testosterone production in rats that we had robbed of one of their two testicles by performing “unilateral orchidectomy”! In the process I learned that in Latin, “testicle” is “orchis”, meaning that our favourite flowers are literally called testicles! This is presumably due to the shape of pseudobulbs, commonly found on some types of orchids. (Incidentally, this nugget of wisdom has never really helped me in my career). Anyway, the productivity was largely due to the brilliance of my doctoral student colleague Jan-Erik Damber, who had photographic memory along with numerous other talents, including athletics. Not surprisingly, he is now a professor of urology with a publication list as long as your arm! The lab rats repaid me for my treatment of their reproductive machinery by giving me violent allergies, so quitting was at least justified from a health perspective.  But in all honesty, endocrinology was simply not for me. It taught me an important lesson, however. That lesson was that passion is a central requirement for success in research.

Growing up in Sweden, forests had always figured strongly in my life. I spent much of my childhood in and around forests, whether bird watching or on all fours looking for spiders or other animals. I had always imagined myself doing something involving forest 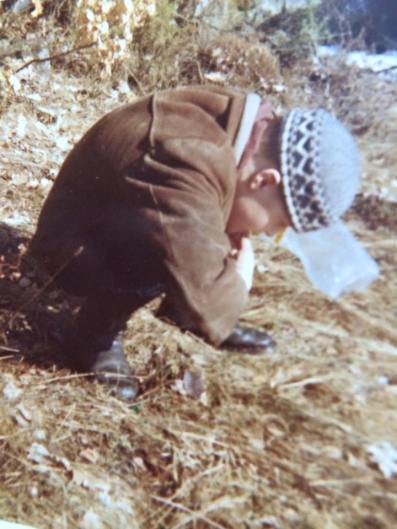 A rather typical photo of me as a young boy. Photo: Unknown

insects, so after my failed endocrinological research career, I managed to get accepted as a special interest student in two forest entomology courses at what was then The Royal College of Forestry in Stockholm. Professor Bertil Lekander, an expert on bark beetle larval taxonomy, became my mentor there, and these two courses eventually set me on the path to where I am today.

My obsession at the time with applied entomology brought me to Simon Fraser University (SFU) and Canada. I describe how I cured that obsession in this ESC Blog. I can thank the Centre for Overseas Pest Research in the UK and the Sweden-America Foundation for that opportunity. My first two years were spent as a student in the Master of Pest Management program at Simon Fraser University (SFU). I was almost immediately given the opportunity for further graduate work by Dr. John H. Borden. John had (and still has) an unprecedented level of enthusiasm and energy. My topic was pheromone-based management of ambrosia beetles. John would climb steep hills to look at a potential ambrosia beetle-infested tree. Being slightly less enthusiastic about (OK – allergic to) hard physical work, I preferred flat areas, which aren’t that easy to come by in many parts of BC. In our lab, field sites became labelled as Bordenized or Staffanized depending on their steepness.

To make a long story short, I survived graduate school, and spent a couple of months working on grain beetle pheromone applications! I then did a 2-year stint as a post-doctoral fellow at UBC with Dr. John A. McLean, working on forest defoliators as well as ambrosia beetles. In 1984 I landed my first real job as a Research Director with a SFU spin-off company then called PMG/Stratford and later Phero Tech, Inc. (now defunct). Their main business at the time was ambrosia beetle management, which was made possible by my invention, the Lindgren (multiple funnel) trap baited with pheromones developed at SFU as the main tools of the trade. Incidentally, this trap came about

A younger version of myself with one of the first prototypes of what became known as the Lindgren funnel trap. Photo: Ron Long.

because of my allergy to hard work. When I started my doctoral research, the primary tool for bark beetle research was several types of sticky traps, i.e., some kind of mesh coated in some extremely sticky material sold under the trade name Stikem Special. Retrieving captured insects was either done by picking them off with forceps, or removing them by dipping the entire trap in hot solvent (nasty stuff called Shell Solvent).  Anyway, my job was essentially product development, working mainly with various species of bark beetles. Then came my “Big Break”.

Setting up a sticky vane trap. These traps were incredibly efficient, but a nightmare to handle.

In 1994, I started my 2nd and last “real” job as Associate Professor at the newly opened University of Northern British Columbia. And this is where my ADD tendencies really flourished, as I no longer had specific product goals to worry about. Quite frankly, I felt like a kid in a candy store! It was hard work, but also an exhilarating time to be part of building an institution from scratch. Consequently, I got involved in all kinds of projects. My first graduate student worked on Pissodes leader weevils, my second on Sesiid pitch moths, and my third on ground beetles. These were followed by students working on bark beetles, ants, root weevils, bark beetles, ground beetles and ant interactions, bark beetles, ground beetles, ground beetles and ant interactions, seed bugs, and finally root weevils. In addition, I had undergraduate students doing projects on ants and root weevils. The sub-disciplines ranged from biodiversity (ground beetles and ants) to insect-plant interaction (root weevils, bark beetles and seed bugs) and population genetics (ants). My knowledge of any of these organisms and sub-disciplines was rather limited, of course, so it meant long hours of catching up with the literature. As strategies go, I doubt that I picked one of the 10 most efficient ones! But I did have fun along the way.

Personality has to play a role in what you do as a scientist. My ADD tendencies are probably perfectly in sync with my broad interests as a naturalist. I am pretty much fascinated by anything that moves, and even things that don’t move. The fact that I survived my years in academia with some level of success is likely due as much to my great collaborators and students as to my own abilities. I have made mistakes along the way, and there are many wrecks along the path I took. But I enjoyed the trip immensely. If I left something of value behind, it is simply icing on the cake!

B. Staffan Lindgren is Professor Emeritus at UNBC. Living in Nanaimo, BC. Jack of all trades trying to stay relevant.
View all posts by cinnabarreflections →
This entry was posted in Biography, Biology, Opinion, Scientists and tagged Academia, Life. Bookmark the permalink.

3 Responses to Confessions of an ADD scientist

Just a nomadic naturalist exploring my ever-changing backyard, and sharing what I learn & find interesting!

This is a blog about spiders (and other arachnids)

An occasional blog about nature, biology and life

Beetles In The Bush

Experiences and reflections of a Missouri entomologist

Join me in the cold, dark, life-sustaining NE Pacific Ocean to discover the great beauty, mystery and fragility hidden there.

Research, teaching, and mentorship in the sciences

The latest news on WordPress.com and the WordPress community.